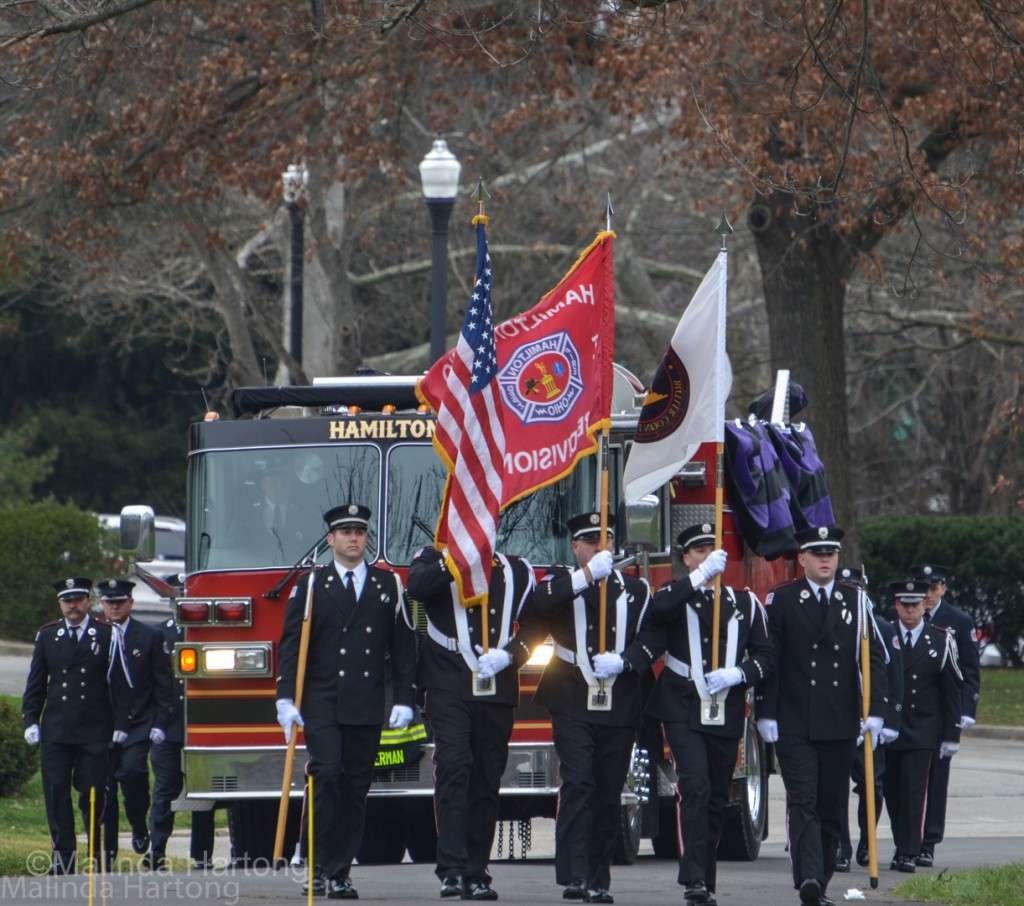 Taking time at the close of 2015 and the beginning of 2016 to divert from teaching photography to photojournalism, family, future.

Waking up Monday, we were expecting a quiet week with visits and fellowship with local and distant friends. But almost immediately I learned about the tradegy in Hamilton overnight. We had lost another member of our fire and police family in 2015, our 3rd just this year.

Even though Glenn & I don’t personally get to know every one of them/you, we have become friends with so many over the last decades, and it’s a very close family. Shooting news, we’re there for everything – cadets, weddings, retirements, and memorials, fires, floods, and more. There has been too much tragedy in 2015. 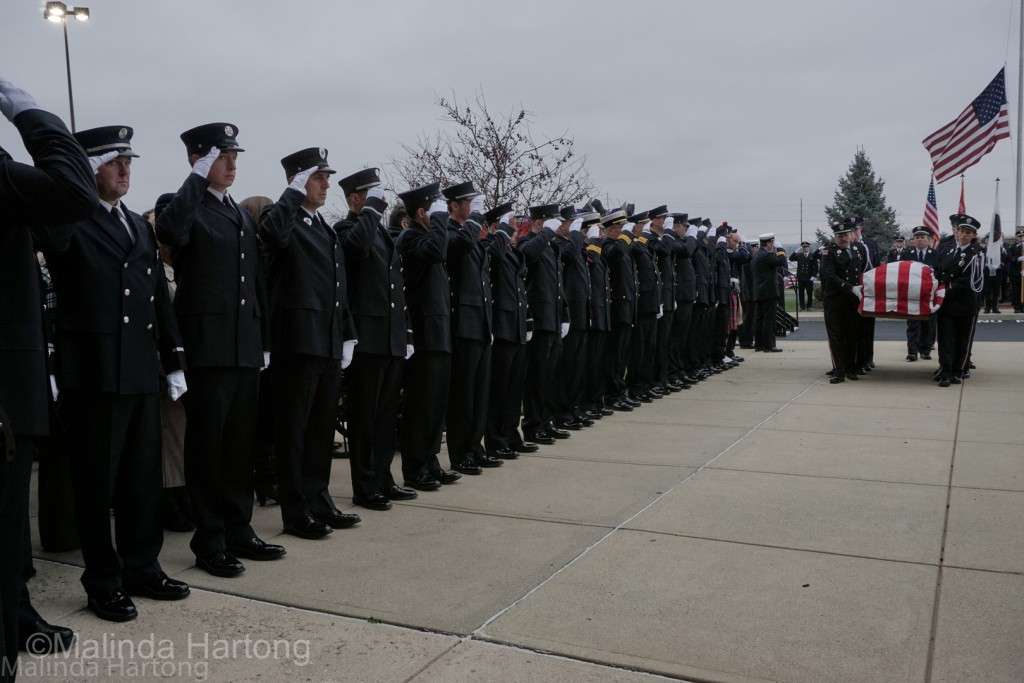 Grey skies overhead and a cold winter wind to accompany the solemn mood of the day, Hamilton firefighters salute as their fellow firefighters carry Firefighter Patrick Wolterman in to the services at Princeton Pike Church of God ©Malinda Hartong

We’re so very thankful to be included in the “brotherhood”. Having spent several decades shooting news, Glenn and I ALWAYS took time to introduce ourselves at every scene, treat every firefighter and officer with respect as a person. I grew up RIGHT behind Station 26 in Colerain Township. My dad managed a car wash on the border with NCH and washed many of the patrol cars for the guys. He became great friends with many officers. My sisters & I attended White Oak Christian Church, and we were there one Sunday when Marvin, who worked right down the hill, had to do CPR on a church member. Just the other day I was in Kenwood Towne Centre & spotted one of my deputy friends, running over to give her a big hug with my niece looking at both of us & rolling her eyes. Her dad, my brother in law, became part of the “family” after I signed up for the 1st Colerain Fire Citizen Academy, he signed up for the 2nd, then sighed up to become a firefighter – his dad had volunteered up north. He graduated right before 9/11, starting at Colerain then moving to our local department – he’s even made a run on me (bigtime!). My sister is a fire wife – God Love Her!

I was fully anticipating the phone would ring – again. Glenn is and has been the 1st name mentioned when fire or police funeral organizers are deciding who to trust with being the sole photographer allowed in to document the “private” segments of the services, having spent decades getting to know the people behind the badges. He’s worked very hard for almost 3 decades to earn their trust and respect.

This would be our 3rd funeral for Line of Duty Death in 2015, plus Anderson Twp’s Kevin Ollier’s death Sept 2014, and this year’s annual fire memorial – with the loss of friend Cincinnati FAO Daryl Gordon so fresh in our hearts. Glenn used to join the 14s for lunch on occasion. Plus to me it seems like Robin Broxterman and Brian Shira’s loss is more recent than 9 years ago especially this week! Patrick Wolterman was part of our Colerain family, having worked & trained part time there for years, as well as Fairfield Township, and hired full time in Hamilton in April 2015 – but in greater Cincinnati in the fire service – everyone knows everyone else! It’s really ONE FAMILY.

When the phone does ring, we never hesitate. This time Glenn and I both separately sent messages on Monday to the guys we knew would be involved, offering any help they needed, again. Events like fire and police funerals are very challenging to document. Loved ones want and deserve to grieve in their own way but their loved one gave life in service of all of us. It’s a very painful situation for all involved. Planning and logistics are a fast-moving, detail oriented nightmare. I cannot even imagine how it all got done in 2 ½ days – miraculous. Just getting us from one location to another is very difficult with road closures, access is extremely limited, discretion is key (we want you there but don’t want to see you), media want files right away… on top of all that – emotions are so raw and we are friends with so many. We want to be everywhere at one time but that’s impossible. We also want to be far enough away we’re unobtrusive but still capture heartfelt images, putting there the public and the colleagues who cannot attend.

Let me just take a moment to publicly thank Steve Conn, Doug Stern, Grant Light, Tom Lakamp, Tim Bayer, and Chad for their countless hours dedicated to the Gordons, the Kims, and the Woltermans – I can’t even begin to show our appreciation for their tireless efforts to honor our fallen heros with truly amazing services. I know so many more are behind the scenes – heart-felt thank you to all!

One moment I want to share. As firefighters and their families got off the buses at Spring Grove to say goodbye to their fellow firefighter, one of the rans literally ran over and enveloped me in a very tight hug, nearly in tears, expressing gratitude that Glenn & I were there for them. It happened so fast it took me hours to figure out who it was. I wish I could have hugged every one of my fire family yesterday – I saw so many I wanted to hug and was unable to do that. I’ll save them for you… hopefully next time we see each other it will be for a happy event. 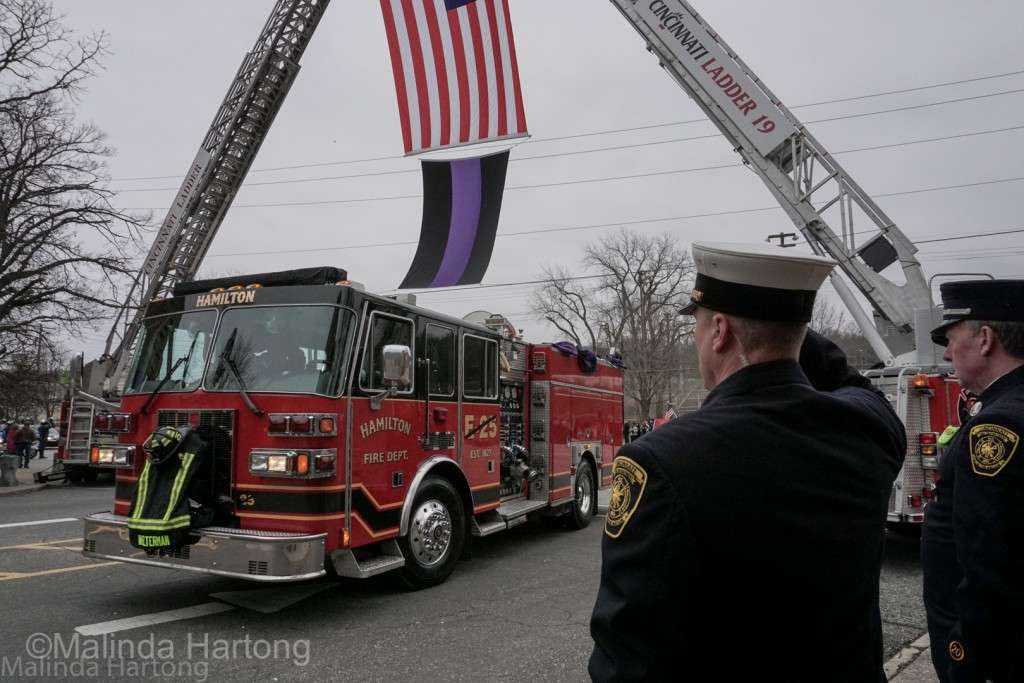 With Glenn leaving the newspaper last month after 27 years of full-time employment, things are totally up in the air right now. We have NO idea what’s next. It’s pretty scary, and exciting. So we need to be able to cover anything and everything – we have been slowly trading in older lenses & camera bodies for newer more compatible and reliable gear in the last few weeks, including trading in my 80-400 for the new Nikon 200-500mm – rare as hens teeth to get one – but I had Paris on my mind – Glenn would need big glass if something like that ever happened close enough he would be called to go – for any media outlet in the world, as well as wildlife photo workshops (a dream of mine).

Then Monday happened. Even before we got the call asking us to be pool photographers for the services, we were getting gear together – just in case. We work with 2 cameras each – one with a wide lens, one telephoto – there’s NO time to switch lenses when you’re depended on for full pool coverage. And we didn’t have enough gear! (See our next post for more on gear & coverage).

I have a D7000 with 70-300 telephoto but no body/wide lens. I grabbed car keys & drove to Indy to pick up a new camera body (only $700 with hoiday rebates) and trade in our old 70-200 he had used at the holidays – and wasn’t happy with. The new AF-S 70-200 f2.8 is $2000, ouch but wow is it nice! More details later but instead of one more Nikon we ended up with a mirrorless body with wide lens for my “wide”. Getting a totally foreign camera the day before IS crazy but it would be my wide angle and I’d have my iPhone for backup. Plus Glenn would be “primary” photographer as usual.

We’re so thankful our “family” trusts us when they need us, and call us to service. We both feel it’s a huge honor and never hesitate. 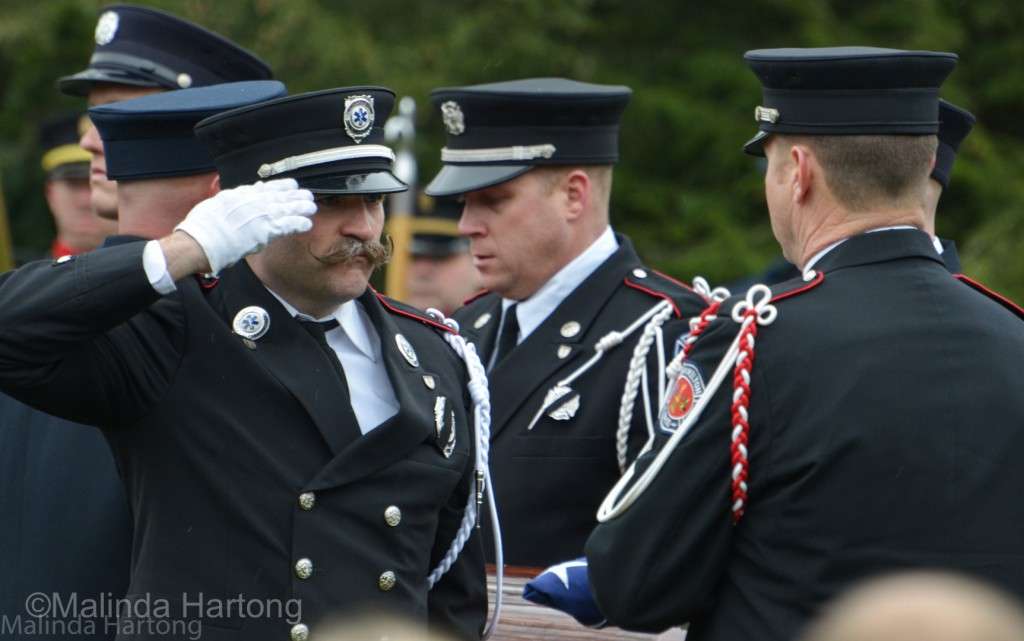 Having folded the flag covering Patrick Wolterman’s casket, it’s passed to Lt Nathaniel Robertson to give to Chief Dawson to present to Mrs Bre Wolterman, just wed to Patrick in May of this year and now a widow. With no chance of precipitation in the forecast, there were snow flurries at Spring Grove as the pipes played. ©Malinda Hartong

As we begin 2016 with not a CLUE about what’s next, the sadness, heartbreak and loss of 2015 is fresh on my heart. No matter WHO you are, tomorrow is never guaranteed, even if you’re one of the top photographers and Emmy-winning video producers in the country and have 27 years of amazing professional experience, looked up to by your colleagues as a teacher and a leader. Try not to take it for granted. And believe. We have faith that our skills will carry us and support us in making a living in the next year and beyond, in spite of the state of media and photography business in general.

There’s also a strong faith that whatever comes next, we’ll have our family, our “real” one as well as our fabulous extended family, there to celebrate the joys and share the heartbreaks by our side.

To the Gordons, Kims, and Woltermans, as well as the families all of our fallen brothers and sisters we’ve had the privilege and honor to be called for,  thank you of sharing your loved one with all of us. We will never forget!

We hope that we do not need to be called again, but will be ready if the phone rings.

We also hope that fear is overcome with faith and love in this new year around the world – our planet is so small. We really are all one people on the inside, wanting the best life for ourselves and our loved ones. Hate and evil cannot and will not abide.